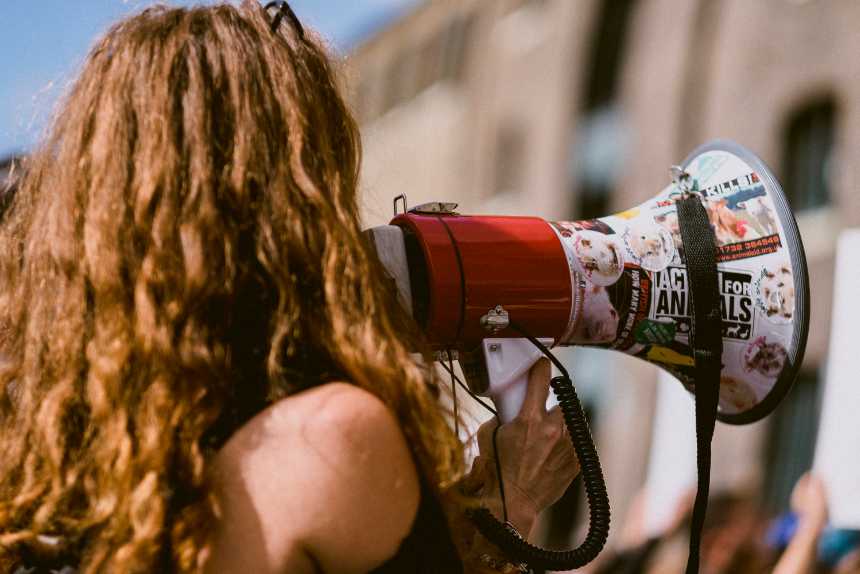 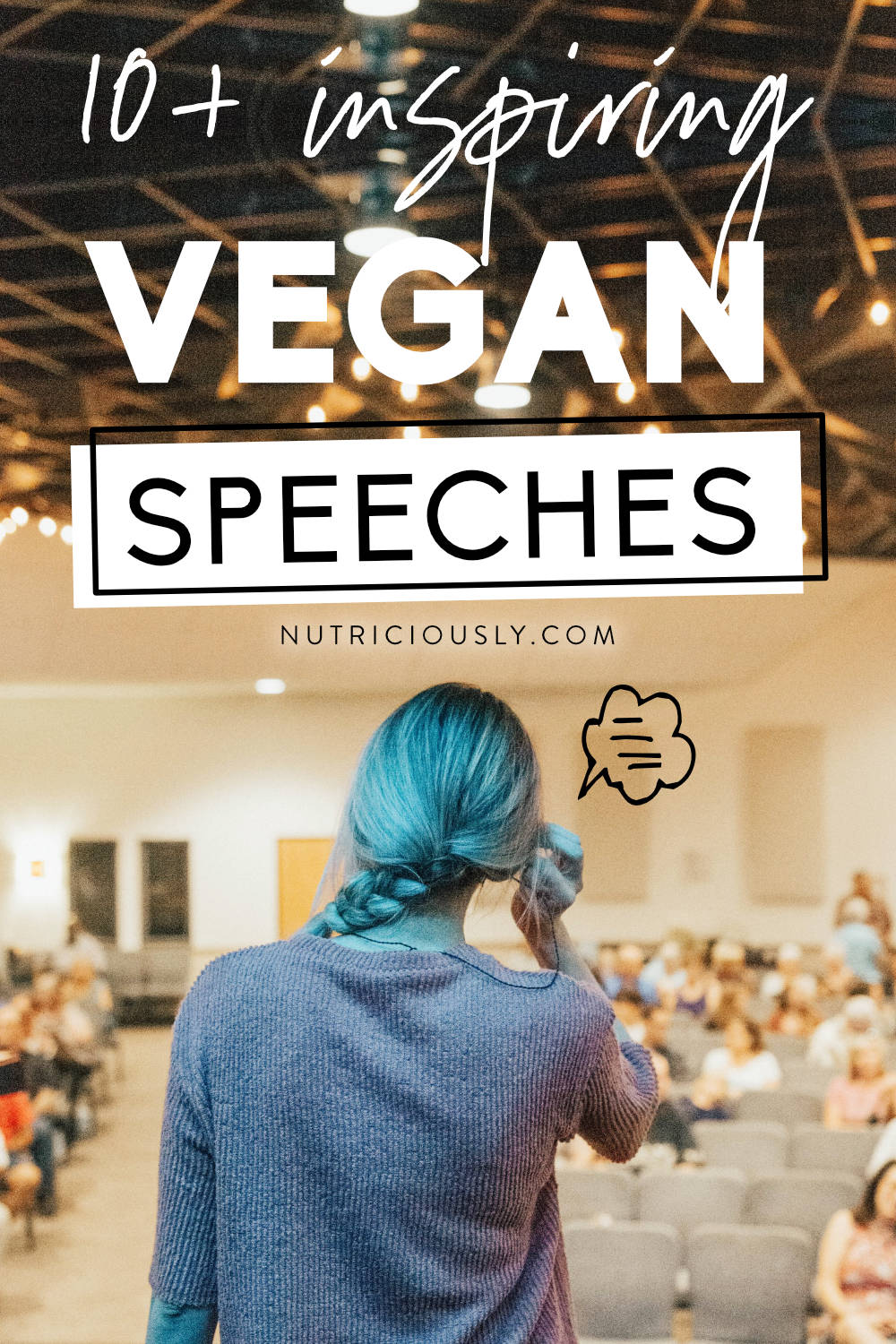 Looking for the most inspirational vegan speeches and TED talks that cover animal rights or the environment? These eye-opening videos will help you connect to this compassionate lifestyle.

No matter if you’re not yet a vegan or have been following a plant-based diet for a while already, it’s always a good idea to listen to others talk about this subject!

With powerful words, these incredible speeches on veganism and animal rights are sure to stir up emotion and get people to take positive action.

After sharing our favorite vegan documentaries, YouTubers, podcasts, and books, we had to cover the most amazing vegan speeches that touched us personally!

Find our complete guide on going vegan for beginners here and read our top reasons why to go vegan if you like.

Enjoy our collection of impactful lectures and talks!

Ed Winters “Every Argument Against Veganism”

Starting out as a meat eater who thoroughly enjoyed consuming a wide array of animal products, Ed was one day faced with the truth behind his daily food choices.

When listening to his speech, it rapidly becomes clear that abstaining from animal products is the only logical conclusion one can really come to after knowing the state of the animal agriculture industry.

Ed is a really fantastic speaker and YouTuber you need to follow!

Known as an outspoken and witty atheist YouTuber, Alex, aka “Cosmic Skeptic,” wasn’t afraid to challenge his moral consistency upon reading Peter Singer’s “Animal Liberation” and felt obligated to make the switch to veganism.

This speech is just about the best 30-minute philosophical case for veganism that you can find.

Did you know that the popular musician Moby is a passionate vegan activist? In this TED Talk, he discusses the personal history and realizations that led him to veganism.

Learn why he thinks that increasing our empathy towards animals is essential to the future health of ourselves and our planet by watching the video below!

Joey Carbstrong “Never Give Up”

Prominent animal rights activist Joey Carbstron shares his dramatic life story and what he was dealing with in the past before going vegan — and how this step totally changed him in every way.

His comparisons between humans in prison and animal agriculture are really touching and you will soon understand why he is one of the most experienced activists touring the world and changing hearts.

Member of the American College of Lifestyle Medicine, Dr. Yami, went through a 30-day experiment that would change her life!

In this wonderful vegan TED Talk, you’ll learn about the changes she made that were the answers to so many problems. As a board-certified pediatrician and a passionate promoter of healthy lifestyles, Dr. Yami has a lot of experience assisting others (especially parents) in eating plant-based — something you’ll notice in her powerful speech!

Get inspired to change your own diet and lifestyle after watching this video.

That Vegan Couple “Every Vegan Must Watch This Speech!”

Take veganism to the next level with this awesome speech given by the Australian couple Natasha and Luca who urge you to become active and help others go vegan.

While abstaining from animal products and other ways of animal exploitation is great, these two argue that it’s not enough to do so silently — instead, spreading the message and speaking up is what made them go vegan and how we can all have a much larger impact.

Philip Wollen “Animals Should Be Off The Menu”

The Australian philanthropist and former Vice-President of Citibank became pretty popular as an animal rights activist when he joined a live debate in 2012 addressing the problems with eating sentient beings.

Many hearts have been touched by his speeches from then on and his story about how he  went from enjoying animal-based dishes to getting real about what happens in slaughterhouses.

Originally from North Dakota, Dr. Barnard turned vegan himself during his adulthood and has studied the effects of diet on diabetes, body weight, and chronic pain, including a groundbreaking study of dietary interventions in type 2 diabetes, ever since!

You’ll enjoy the way he presents his findings and talks in a charming and easy-to-understand manner in his TED Talk.

Have you ever heard of the term “carnism”? Coined by psychologist Melanie Joy, it refers to the invisible belief system that is currently dominant in our society.

Her popular speech on veganism and meat-eating takes you through her own stages of awakening to the truth of why we consume animal products without thinking twice about it!

This video is definitely a must-watch.

Dr. Michael Greger, the founder of the website NutritionFacts.org, is known for his scientific approach to diet and wittiness.

Using a collection of peer-reviewed studies, Greger reveals the true causes behind the top 15 causes of death, and how simple dietary changes can stave off or even reverse the impact of many of these causes.

James Aspey’s “This Speech Is Your WAKE UP CALL!”

James Aspey made waves by spending a full year silent, not speaking in order to protest the mistreatment of animals.

In his speech, Aspey delves into why he feels the food industry misled him, telling him he needed animal products when plant-based products provide all the nutrition he needs.

By the end, Aspey makes a clear case for why veganism just makes sense — and how most non-vegans actually agree with his fundamental point of view.

More than just a list of “why’s” for veganism, Wildman’s presentation is a funny, approachable introduction to why people choose to lead a vegan life.

Wildman questions many of the meat and dairy industry’s chief claims in this lecture about the treatment of animals, and as the speech was originally written for a high school audience, it is incredibly approachable while still being informative.

The Joker star and long-time vegan actor Joaquin Phoenix who narrated the popular documentary Dominion gave a pretty breath-taking speech when he won his Oscar in 2020.

Taking the stage, he began with a heartfelt plea for tolerance — first mentioning marginalized groups of human beings and then moving on to animals and going completely off-script.

It has made many headlines and is certainly worth the short watch!

If you’re looking for more helpful content about veganism, check out the following articles next!

Did you enjoy our list of vegan speeches? Which one is your favorite? Let us know in the comments below, share it with your friends and Pin this article here.

Enjoy 7 days of healthy, colorful, and cozy fall and winter-inspired meals and snacks! Fully planned out with a grocery list and meal prep session.