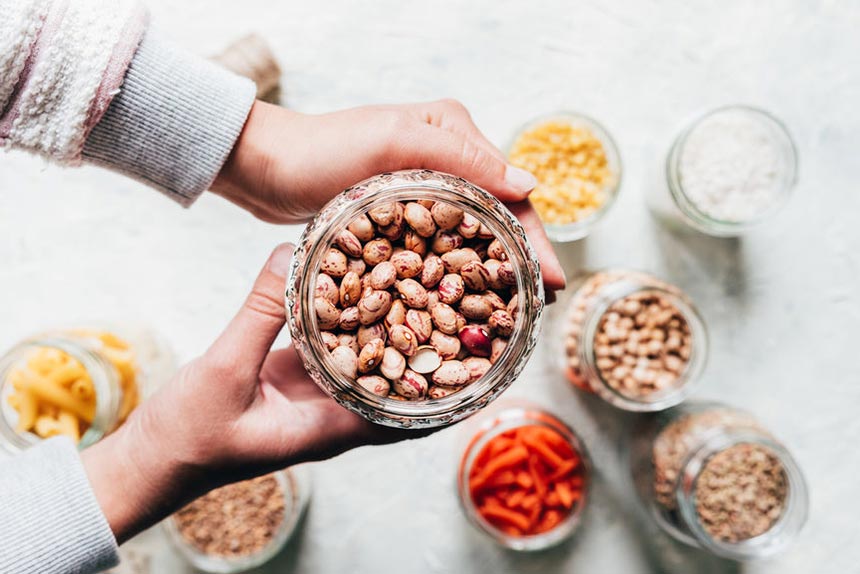 It seems the world is obsessed with protein. People drink protein shakes before their workout. Bodybuilders chow down on chicken, tuna, and eggs in order to get desired results. Plant-based eaters are constantly asked where they get their protein, and nearly every processed health snack references protein value as a reason to buy.

It’s no wonder, then, that when one chooses the plant-based lifestyle, protein intake often comes to mind.

Vegans and vegetarians are (unsurprisingly) more under fire from the protein hype, due to the common misconception that protein is only obtainable from animal foods. Thankfully, this view is becoming increasingly outdated, but we’re still having to field questions left, right and center about our protein sources.

When somebody first transitions to a plant-based diet, it’s easy for them to feel confused. They may ask questions like:

“Where can I get my protein from? Do I need to take protein powder? What about ‘complete’ proteins? How can I be sure I’m getting enough?”

The good news is, plant-based eaters definitely don’t need to worry about their protein intake. If you’re wondering about protein, hopefully, this article will provide you with everything you need to know.

How Much Protein Do We Really Need?

It’s easy to see why protein has become such a big focus in modern diets. Sure, it’s incredibly important, being used for various jobs within the body. Protein forms the ‘building blocks’ of life and is used to:

In the US, the daily reference intake (DRI) for protein is 0.8 grams per kilogram (or 0.36 grams per pound) of body weight. If you weigh 60kg, for instance, your recommended intake would be 48 grams which really isn’t that much.

And as it happens, protein does not have to be the focus of every meal for you to get enough. Of the 22 amino acids our bodies need, only nine of them cannot be created by the body. We call these ‘essential’ amino acids.

Where can I get my protein from?

Vegans don’t need to worry about where they’re getting their protein or whether they’re getting enough protein because it can be found in every single whole plant food. Yep, that’s right – even those fruits and veggies you’re eating contain some grams of protein.

Plant-based protein has been shown to be much more beneficial to the body than animal protein. This is because it also contains healthy accompaniments of carbohydrates, fiber, vitamins, and minerals…in other words, they are “package deal” foods.

Animal protein, on the other hand, is devoid of fiber, which leads to poor digestive health, weight gain, and cardiovascular disease. It is also typically higher in fat and cholesterol which are major risk factors for chronic diseases, including heart disease.

Animal protein also comes with an increased cancer risk due to their higher proportions of essential amino acids. This causes our bodies to produce higher levels of the hormone insulin-like growth factor-1 which can lead to cancer growth.

One of the proteins found in dairy, casein, is also strongly linked to several types of cancer.

The examples listed above are mainly whole, unprocessed sources of protein. Minimally processed foods like tofu, seitan, or whole-grain flours are still healthy and can be included in a well-rounded plant-based diet.

While nuts and nut butters offer a good amount of protein as well, they are also high in fat. Therefore, they shouldn’t be used as your main go-to protein source, ideally. Instead, enjoy them sparingly as a protein-boosting addition to smoothies or salads.

Do I Need to Take Protein Powder?

The food market is brimming with various vegan protein powders that are often hyped by celebrities and marketing. People become convinced that in order to stay healthy (and avoid wasting away) they ought to be consuming these powders daily.

In order to create a protein powder, protein has to be extracted or isolated from certain foods, which means high amounts of processing is taking place. These powders are so processed that your body may not even be able to recognize them and use them efficiently…which is kind of defeating the point.

As well as this, protein powders aren’t regulated by the Food & Drug Administration (FDA) and their use of the word ‘natural’ isn’t regulated either. So when you see those ‘natural flavorings’ mentioned, there’s no sign of where they may be coming from. Many plant-based newbies feel more comfortable adding a protein powder to their diet – at least at first. If this is you, just be sure to choose one that is whole or unprocessed, made from only a single ingredient.

Spirulina, for example, is a green algae bursting with protein and other nutrients, which is dried and can be added to smoothies. Hemp protein is also a good option, made from hemp seeds that have been finely ground and the oil extracted (though you’d be getting more of the hemp benefits simply by adding the hemp seeds whole).

What About ‘Complete’ Proteins?

Once upon a time, the nutrition world was of the belief that plant-based proteins were ‘incomplete’ – that is, they contained only some of the amino acids our bodies need. Therefore, we should combine certain foods together (like rice and beans), in order to create a complete protein. This concept was called ‘protein complementing’.

Rather than conclude that we shouldn’t breastfeed our children (which would have been crazy), scientists were forced to look at the limiting truth – that rats grow ten times faster than humans and therefore need ten times as much protein. Therefore, the whole study was not even representative of humans and their needs.

Luckily, we now know that protein complementing is a complete myth. All foods contain essential amino acids – yes, some less than others – yet our bodies do a fabulous job of combining them all by themselves. Like a jigsaw, our bodies will ‘piece together’ the various proteins from everything we eat in a day.

If you’re ever in need of a little reassurance about this, consider the sheer number of plant-based athletes there are in the world. Author and ultra-endurance athlete Rich Roll claims his athletic accomplishments over the past eight years have been because of his plant-based diet – not in spite of it.

In his article on Forks over Knives on the protein myth, he talks about how plants are more than enough fuel for his 25 hours a week training regimen – with no issues with regards to building and maintaining lean muscle mass.

So if you’re plant-based, you don’t need to worry too much about which foods to eat when and with what. Which is lucky, because who has time for that?!

The Dangers of Too Much Animal Protein

Despite what the bodybuilders might tell you…you can eat too much protein. This might seem a crazy concept in a world that’s always telling us how important it is, but more recent studies are now highlighting the negative effects of eating too much protein from animal sources.

In a New York Times Op-Ed, Dr. Dean Ornish talks about the myth of high protein diets. He references a study which found a 75 percent increase in deaths from cancer and Type 2 diabetes, among ‘heavy consumers’ of animal protein under the ages of 65.

In other words, those who got 20% of their calories from animal protein were more likely to die from a chronic disease.

How Do I Know if I’m Getting Enough?

As with any new diet or lifestyle, it’s easy at first to be worrying about doing things ‘perfectly’ and want to measure everything. Some people – plant-based or not – use nutrition apps to count their macronutrients and ensure they’re staying on top of their protein intake.

However, this is absolutely not necessary. If you’re eating enough, and it’s mostly whole, unprocessed plant-based foods, it’s very hard to not get enough protein.

According to the Vegetarian Resource Group, “it is easy for a vegan diet to meet the recommendations for protein, as long as calorie intake is adequate”. In other words – eat when you’re hungry, stop when you’re full, and eat a variety of wholesome, plant-based foods. The Ph.D. candidate in Nutritional Epidemiology Micaela Karlsen agrees on the importance of volume and variety in one’s diet when it comes to fulfilling protein needs.

Using the adequate protein target of 8-10% of her daily calories, Karlsen gives a very reasonable day on a plate for the typical plant-based eater. All in all, she clocks up 1950 calories, 11% of which is protein, all without very much thinking or preparation at all. Here’s what she ate: oatmeal with banana and 1 TB of maple syrup for breakfast, an apple, carrot, and crackers and hummus for snacks, whole wheat noodles with kale, tomato sauce and white beans for lunch, a big salad (4 cups) with carrots, tomato, avocado and balsamic vinegar, a stuffed pepper, and broccoli for dinner, and a baked apple for dessert.

Eating more protein won’t automatically make you gain muscle faster. If you’re worried about losing muscle definition, then remember exercise is the number one way to gain and maintain muscle and build healthy bones – especially if its weight-bearing or involves some kind of resistance. That, combined with eating enough, and eating a huge variety, is certain to quell any risk of protein deficiency.

So don’t drive yourself crazy and​ indulge in the delicious variety of whole plant-based foods. Your body will thank you for it.

Have you been worried about getting enough protein on a plant-based diet? Do you have a hard time eating legumes or do you like to have them? Let us know all about it in the comments below. 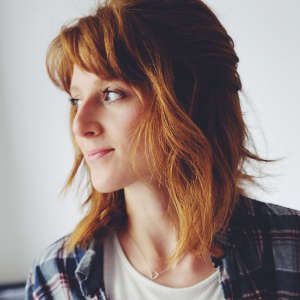 Adele is a plant-based food and lifestyle blogger that’s been living the plant-based life for four years. Having learned a lot about diet, cooking, nutrition, food labels and how to find what works best for one’s own body, she’s now on a mission to share her experiences and show how amazing the plant-based life can be.
Her blog Everything’s Peachy showcases the best ingredients, products, recipes and brands that are all hugely helpful in living a compassionate lifestyle, whilst celebrating the idea of the ‘free’ life.