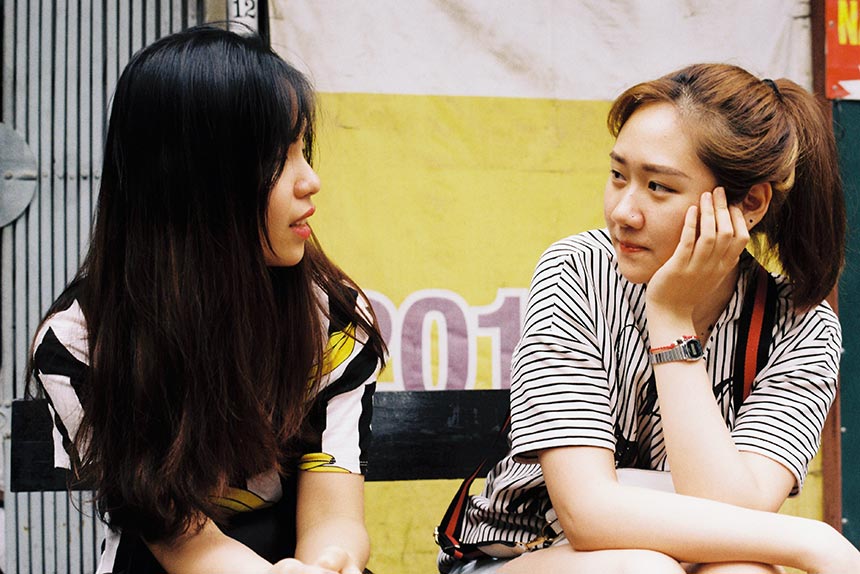 One of the hardest things about being vegan is having to live with people who aren’t and who don’t understand why you have decided to adopt a lifestyle free from animal products. Sometimes living with non-vegans just means having to answer a huge volume of questions, but often it can mean being mocked, criticized and insulted.

Obviously, this can be really hard for anyone and even people with strong convictions will end up tired and weary of the same questions and arguments.

It can seem so strange and confusing that our friends and family, the people we are supposed to be able to trust and lean on for support, would be the people turning on us and disrespecting the choices we have made. So why does this happen?

Why Does Going Vegan Cause Friction?

Firstly, for whatever reason you decided to go vegan, whether it be for the environment, the animals or your health, you are indirectly implying that those who don’t go vegan with you are living in an immoral and unhealthy way.

Even without stating these things to non-vegans they immediately feel that way because logically, if you have gone vegan due to the fact that eating animals is immoral, you are then insinuating your friends and family are immoral if they continue to eat animals. You don’t even have to say this to them as they will come to this conclusion themselves, sometimes without even consciously being aware of it.

This is why so often one of the main defense mechanisms for non-vegans is to try and highlight a hypocrisy in your lifestyle. They’ll say something like, “animals still have to die to harvest crops for plants”, or “your phone was made in China by exploited workers”. It’s as if they feel that you are being morally superior by being vegan so they try and expose you as being immoral to justify their own bad habits.

Statements like that can be really annoying because they are basically saying there is no reason to try and make positive changes to your life because there will always be something that needs improving. If everyone lived with this mentality then we would never make any important changes and progress as a society.

The reality is, being vegan isn’t about being perfect or about being superior. Quite the opposite in fact, veganism is about highlighting that we are not superior and are instead equal to all life.

Being Confronted With Feelings of Guilt

One of the other fundamental reasons that parents and friends often criticize us for going vegan is because it brings out feelings of guilt or even worry among them. If vegans prove that we can live healthily and happily without having to harm animals then it proves that they don’t need to eat animal flesh or secretions and in doing so they are sentencing animals to a life of confinement, pain, and death for no necessary reason.

Even though subconsciously most people are aware that we don’t need to harm animals and most even claim they are animal lovers, these same people have repressed this knowledge and chosen to favor willful ignorance over aligning their actions with their morals.

By being around vegans it forces them to confront within their own mind why they pay for animals to be killed, for the environment to be destroyed and also for their own bodies to be more susceptible to the leading killers of people in the Western world. Consequently, this causes their ego to try and justify why they are non-vegan and this causes confrontations in which our friends and family will criticize, question and mock us for going vegan.

Furthermore, due to the fact our generation has the ability to seek and find an abundance of independent research that illustrates just how damaging eating animal products is to our health, our family will feel predictably concerned that the diet they have followed for their entire lives is, in fact, detrimental to the longevity of their life, which in turn causes misdirected anger.

Instead of being angry that they were lied to by the animal agriculture industries and the government, our parents can become angry at us for revealing the truth and breaking the wilful ignorance that so many people live comfortably with. There is also a hierarchal structure within families, parents believe it is their role to educate their children so when the roles are reversed naturally parents can become defensive.

How to Live With Non-Vegans

So what can you do to make this easier and less stressful?

The first thing to do is educate yourself as much as possible about all the different aspects of veganism so that you always have a well-educated answer to any questions people ask you. This is so important as not only will it make you feel more confident but once you’ve been able to answer all your family’s questions they will run out of arguments to have with you.

Also, if you can give educated responses it will make veganism seem more reputable and grounded in knowledge and fact. So arm yourself with a range of facts including; where you can obtain specific nutrients like protein and calcium from, the health implications of eating animals such as heart disease, diabetes and cancer and also the ethical and environmental problems associated with eating animals and their secretions.

The next important thing is to be clear, determined and strong in your convictions, don’t be afraid to explain why you are vegan and why it is so important to you. The more passionate and committed you seem about veganism the more people around you will respect your decision. This ties in perfectly with educating yourself because the more knowledge you have, the more confidence you’ll have to effectively explain why you’re so passionate about being vegan.

It’s important to try and get your family to understand why you went vegan so showing them any documentaries, videos or articles that inspired you to go vegan will go a long way in helping them to understand why you chose to make the transition. Family members won’t always watch a feature-length documentary so try showing them shorter videos on YouTube instead. There is a 15-minute version of ‘Cowspiracy’ on YouTube that is perfect for showing your family the facts without having to get them to sit down and watch a full-length film.

Uprooting the Leading Causes of Death

The Most Inspiring Speech You Will Ever Hear

Cooking is another really great tool to convince any skeptical family members that being vegan is easy and delicious. If you don’t know how to cook then learn and offer to cook meals for your family on a weekly basis, not only will your parents enjoy having one less job to do but it’s a great way to show how affordable and nutritious veganism can be.

You could also make muffins, cakes and veganize your family’s favorite meals. You should also buy your own products and get vegan versions of as many household foods as possible, this shows just how easy it is to live vegan and that you don’t have to give anything up.

Most importantly, don’t let being a vegan in a non-vegan house get you down. Try and remain as positive and focused as possible, after all, veganism is a complete shift and a challenge to many societal norms. It goes against so much of what we have been taught and waking up to the realization that we can live an alternate way that doesn’t involve slaughtering trillions of animals each year is a huge awakening.

It’s only natural to feel despair and frustration when people mock or simply don’t understand veganism as to us it is so grounded in logic it seems impossible to not understand. If your family refuse to listen and won’t go vegan then find some vegan friends, there are so many vegan groups on social media and meetups in varying cities that it is easy to connect with like-minded people who share the same values as yourself.

What are your personal tips and experiences for living with non-vegan? Has your relationship changed or maybe even improved? Let us know in the comments below.

Ed is a committed vegan activist and spreading compassion through educational means has become the biggest passion and drive of his life. Since early 2016 he has been creating educational YouTube content alongside dedicating his time to talking to the public about the morality of eating animals in order to encourage positive discussion and debate. He also a co-founder of Surge, a creative grassroots animal rights organization and regularly attends protests, demonstrations, and outreach events that focus on a variety of animal rights issues. Find his work on YouTube, Facebook, Instagram and Twitter.

11 thoughts on “Living With Non-Vegans: A How-to Guide”

Get 20% off our whole food plant-based meal plan with delicious and filling recipes with code NEWYEAR! This bundle comes with a starter guide, 60 recipes, and fun printables.